Victoria Hall, Petrolia is a national historic site, a provincially designated heritage building and a cultural center for Lambton County. In January 1989 on the event of its centenary, Victoria Hall was tragically gutted by fire leaving only its massive brick walls intact.

As a late 19th century public building Victoria Hall is a very fine example of the Queen Anne style by its leading Canadian exponent, architect George F. Durand. Durand was born in nearby London ca. 1850 and came from a family of builders and had worked as a young architect on both the Parliament Buildings in Ottawa and the New York State Capital building.

The building that Durand created as Petrolia’s town hall exhibits a lightness of touch in the detailing and ornamentation. The added exuberance of Durand’s design for Victoria Hall was perhaps inspired by the challenge of combining the municipal offices but also the police station and fire hall.

The entire second floor was given over to an opera house. 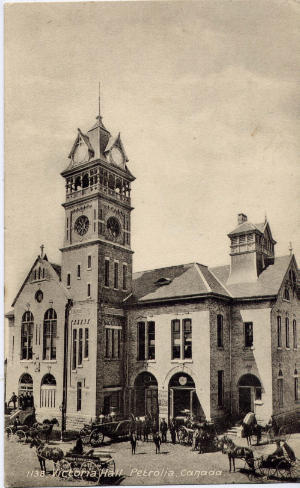 While Victoria Hall is important architecturally on both a regional and national scale, its designation as a national historic site was made for reasons other than the merits of its architectural style. Victoria Hall represents the culmination of three decades of achievement in Canada’s early industrial development.

During the 1900s, the town’s oil industry declined. By the late 1950s, the opera house fell into disrepair through disuse. In the early

1970s, a teacher and his students wanted to use it and decided to clean it up. This sparked local citizens to create the Victoria Playhouse Foundation to restore the building and once again make it a cultural and community centre.

The police department moved out in the early 1970s, but fire trucks continued to roar out of the building until 1977. Victoria Hall became a National Historic Site in 1979. In the 1980s, a glass foyer was added and the clock tower was temporarily removed for repairs.

Suddenly, on January 25, 1989, fire gutted the building. After much debate, Victoria Hall was rebuilt at a cost of $6.5 million. 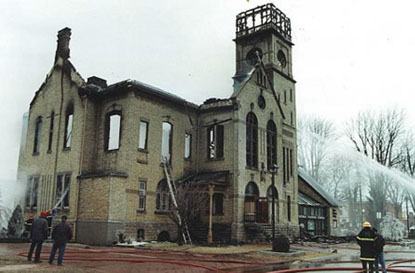 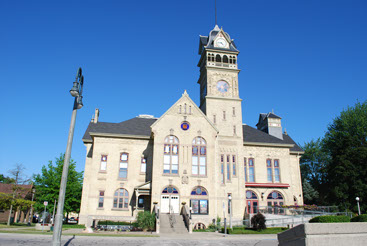 Through grants, generous donors and countless community fundraising events, the town successfully raised its required portion of the cost; $750,000. Very impressive for a town that was only 4,500 souls!

Philip Goldsmith of Quadrangle Architects Ltd. mixed a contemporary interior with a faithfully rebuilt exterior, using the authentic materials needed for a heritage designation. It was a real challenge to design the council chamber, offices, a lobby big enough for many events and a state of the art theatre seating 400.

“It’s really a community building which allows for theatre functions,” he said. The hardworking community celebrated with opening gala on Sept. 26, 1992.

For the entire summer (from mid-May to mid-September),

Victoria Playhouse Petrolia brings in six shows, plus it books performances throughout the year.

Christopher Wallis were added to the entrance. Fairbank Oil presented them to the town to help everyone remember Petrolia’s amazing oil history as they create new memories at Victoria Hall.